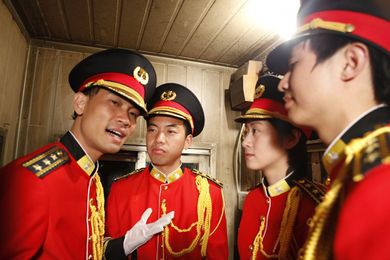 BIO/ STATEMENT:
in his practice, Hu Xiangqian (https://artsy.net/artist/hu-xiangqian) tends to make humorously absurd narratives that draw on current events, popular culture or biographical experiences, with themes of uncertainty, social perception, and cultural identity. With a keen eye for the absurd, he skillfully highlights the contrasts in our society and amplifies minor incidents into major social signifiers. One of his best-known video works, “Blue Flags Everywhere”, documents a humorous but earnest attempt to run for mayor of his hometown at the age of 21. In the video “Sun” , Hu Xiangqian tries to tan himself the same shade as two of his close African friends, while “Drift with the Tide” is a poignant work about the artist leaving university by literally rowing out to sea.

Hu Xiangqian disagrees with being categorized as a performance artist—he thinks both “performer” and “actor” are more appropriate terms to describe his performance and video practice. Hu, who never formally studied theater or film, says: “I lend my body to a story.” Hu is also influenced by the teachings of Indian mystic Bhagwan Shree Rajneesh on the subject of boredom.