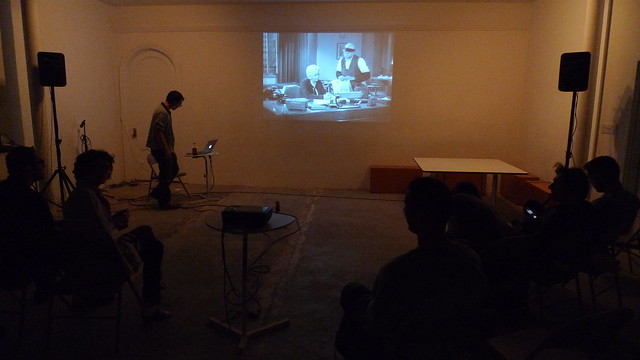 Luke DuBois is a  composer, performer and digital artist.  For this screening DuBois will present his recent work The Marigny Parade—which debuted at the 2011 New Orleans Biennial where he involved 350 musicians. The artist will also present a selection of short videos from past to new works he is working on and share his fascination with American pop culture, which he places under a computational microscope.  He raises issues relevant to information theory,  perception of time, canonicity, and gaze.

DuBois (b September 10, 1975 in Morristown, New Jersey, U.S.) holds a doctorate in music composition from Columbia University, and has lectured worldwide on interactive sound and video performance. DuBois is an ISSUE Project Room board member and a professor at NYU-Poly.DuBois holds both a master's (1999) and a doctorate (2003) in music composition from Columbia and worked as a staff researcher at Columbia's Columbia Music Center until 2008. He has taught interactive music and video performance at a number of institutions, including Columbia, Princeton University, the School of Visual Arts, and the music technologyand interactive telecommunications programs at New York University.

Asher Remy-Toledo is a new media focused  art facilitator and producer based in New York. One of the founders of No Longer Empty, he has organized media-sound projects for the Liverpool Biennial, as well as other international exhibitions and festivals in China, Europe and U.S. He is artistic advisor for the Organization of the American States museum in Washington and is involved with ISSUE Project Room in curating a series of evening performances.