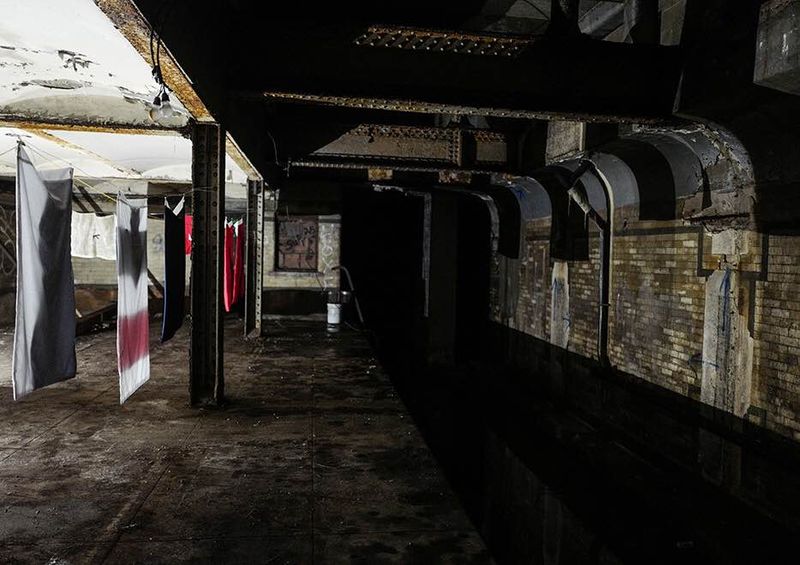 In an abandoned subway tunnel deep under Nevins Street, artist Phil America has reclaimed a fraction of New York City's unused space to rally against gun violence. The artist-activist's latest installation, The Perilous Fight, is only accessible through an illicit and dangerous wander through the subway tunnels. It's an installation of a different kind in a location that resonates with the theme of his work. On display in this "gallery space for no one" is a series of flags embroidered with guns that each represent a separate instance of gun violence in America.

The flags are a tribute, a memory, and a reminder; they are the promise that those lost in these terrible events are not forgotten. They serve to remind that gun violence in America is so prevalent that it has become a part of our national identity.

Here, we caught up with Phil America about why he chose this particular location for the installation, and what that location means to the art. Why did you chose to create this installation in an abandoned subway tunnel?

Gallery space in New York, like any other big city in the world, is nearly unaffordable to an artist. If we want to show work we have to have the support both financially and logistically of the art world. In some way we have to give up power which ultimately leads to us giving up our voice and the art itself gets lost and diluted in the process.

There's so much unused space in NYC, especially underground, so I figured it would be interesting to reclaim some of that space in the name of art.

How did you come across the spot?

Actually a photographer friend of mine, Ashflip, showed me the spot. I've explored a lot of the tunnels in most of the bigger subways systems in the world so I was aware of the spot prior to this but this location wasn't chosen until recently.

How did you pull this off?

That's a hard question, mostly because of the danger answering it can potentially put me in. The police watch everything I do and are already investigating it so let me explain to you what the person who actually did the installation of the artwork would have to do to create it: First they'd have to find the place and figure out the blueprint of it and use the keys to get in. To enter the spot they'd need to time the trains going both ways perfectly and run in the tunnel on the live tracks between trains, avoiding the deadly electric third rail. Then, they'd have to go down into the depths of the tunnels with big flashlights trying to make sense of a part of the city that's long since been forgotten. Once you arrive at the abandoned station you would start the install with a generator and lights and all that it takes to install an "art gallery" there. Have you ever been chased by the MTA?

Are you worried that sharing the installation with the press will create the risk of exposing it and yourself to the MTA?

Well, the people I'd be worried about finding it already know it's there, so at this point l don't know if it matters much. The burden of proof is on them to prove I went down there and if they truly want to prosecute me for trespassing to an unused space to show artwork commemorating lives lost to mass shootings, they will.

How many people have come to see it?

I'm not really sure. There is a huge urbex (urban explorer) community and I know a lot of them have gone to see it, but beyond that I don't know. I personally don't condone anyone going for the obvious reasons, but I'm not really sure who all has gone.

How long will it be up?

It could be gone right now as we speak and it could be there forever. Only time will tell. 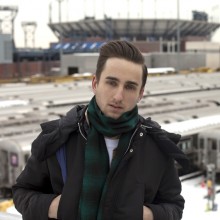