The Visible World is Merely an Isolated Case “Formerly we used to represent things visible on earth, things we either liked to look at or would have liked to see. Today we reveal the reality that is behind visible things, thus expressing the belief that the visible world is merely an isolated case in relation to the universe and that there are many more other, latent realities. Things appear to assume a broader and more diversified meaning, often seemingly contradicting the rational experience of yesterday...”

Cuchifritos Gallery and Residency Unlimited (RU) are pleased to present their sixth annual collaboration, The Visible World Is Merely an Isolated Case, featuring the recent paintings of Guillaume Bresson and Ana Prata.

With two distinct approaches to contemporary painting, Bresson and Prata mute stylistic expectations in the service of a visual language that has no spoken form a collection of simplified narratives, signs and symbols that communicate from the silences between words or thoughts.

For this exhibition, Bresson and Prata employ thoughtfully unfinished works and abstraction to turn one’s focus away from skill and technique—mastery yielding to process. Bresson’s revelation of detailed sketch work and underpainting bears a similar function to Prata’s layered abstraction, each providing insight into the gestures and processes of creating the work. While the pairing of their techniques represents stylistic extremes– Bresson’s classical roots in Renaissance and Baroque painting and Prata’s borrowing of multiple modern styles—together they build a language around representations of movement and stillness, reality and incongruity, tragedy and humor.

The harmony and tension between their works convey strong parallels to Paul Klee’s 1920 observation that representation in art was soon to be a thing of the past. Still in the after effects of World War I, Klee (like many of his peers), expressed an urgent need to look into the world, rather than at it. Art’s purpose was no longer as a reflection of the known world, but rather, it was to become a tool to push at the psychological edges of human awareness to reveal and react to realities lying in wait. While Klee proposed a visual philosophy of Transcendentalism and Metaphysics, his work showed little resemblance to this complexity. Instead, he developed a vocabulary of simplified forms in order to express a spiritual state of being beyond the physical world.

Similarly, Bresson and Prata experiment with various methods of simplification to produce a liminal space between intense feeling and technical mastery.

Bresson’s heroic style elevates isolated quietude into small victories of the everyday. His use of captured movement creates a suspended dreamlike space that, while written in recognizable forms, transforms into a surreal dystopia when combined with hyper-real depictions of anonymous modern spaces.

Prata’s body of work, if considered as a whole, dismantles any attempt to build an historical timeline. Moving between and manipulating various styles—primitivism, cubism, expressionism, minimalism—Prata’s encyclopedic use of symbols and patterns grows into a language rooted in the history of visual art however, in borrowing across time and style, Prata’s distortion of form—hieroglyphs in symbolic space—proposes a reflection on how representations are read within a contemporary context.

A small publication will be available in coordination with the exhibition, including a selection of photos of Bresson’s collaborators, as well as series of Prata’s charcoal drawings. 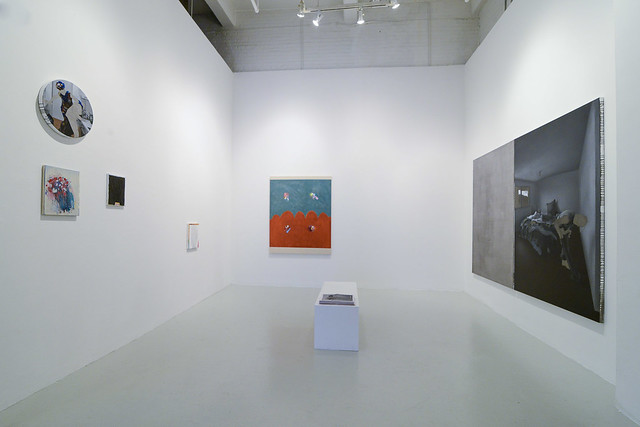 Guillaume Bresson questions the notions of scene-setting and narration in painting. His work calls forth the tradition of figurative narrative painting by subverting it with personal cultural references and depictions of pared down and theatrical urban settings. His paintings oscillate between an apparent desire for visual realism and a contemplative ideal resulting in a complex and imaginary temporality where the past reinvents the present of painting. Represented by Nathalie Obadia Gallery (Paris-Brussels), Bresson's work has been shown internationally including in 2010 at the Palais de Tokyo and Musée d’Art moderne de la Ville de Paris (group show "Dynasty", curated by Marc Olivier Wahler and Fabrice Hergott) Staatliche Kunsthalle Karlsruhe French Institute of Bratislava, Slovakia Perm Museum in Russia’ Domaine départemental de Chamarande, Palais des Arts de Dinard and Mudam in Luxembourg. In 2015 his work was featured inDesdémone, entre désir et désespoir, at Institut du Monde Arabe in Paris. He was also commissioned in 2015 by Les Nouveaux Commanditaires to create the “Commande du Red Star Football Club de Saint-Ouen (93)” and another commisson by the Festival d'Avignon for the Église des Célestins, Avignon (Fr). In 2014, éditions Dilecta published a monography of his work

Ana Prata’s work is characterized by openness and freedom of research, allowing space to be contaminated by different ideas. Her work’s subject is the very painting itself, which varies in groups of scales and subjects. They are quite objectual and abstract with less of a traditional support. Each painting she produced is an object that carries its own internal logic and visual voice. She is interested in deepening her research on a socio-cultural context basis. The geographic shift from Brazil to New York allows her to explore the new environment and discover new means in which will help her understand the relation between the work and space. This kind of contamination to invade her production is very important to her, just like a stimulus, awakens a profound reflection and a new focus in her work. “To me, her demeanor toward painting seems to suggest an alternative both to the painter as an editor of styles, a sterile manipulator, as well as to its counterpart, the recovery of the anti-historical and affected image of the painter-hero. At a glance, it felt like perusing a chapter of a book on modern art history: primary colors, geometric shapes (or almost) — everything was there. The analytic cubism, the primitivism, the zigzags, the monochrome. Almost all of them in a tiny format, the works seemed to dissolve in the white expanse of the gallery, while at the same time inviting individual examination. Prata avoids the spread-out constellating approach common these days and displays her works in a traditional way: at eye height, only varying the distance between them.” (By Pedro França, Flash Art, no. 300. Volume 48 – 2015. January – February).

Cuchifritos Gallery + Project Space is a program of Artists Alliance Inc., a 501c3 not for profit organization located on the Lower East Side of New York City within the Clemente Soto Vélez Cultural and Educational Center. Cuchifritos is supported in part by the New York City Department of Cultural Affairs in partnership with the City Council. This program is made possible by public funds from the New York State Council on the Arts and the National Endowment for the Arts. We thank the following for their generous support: Marie and John Zimmermann Fund, Gilbert MacKay Foundation, New York City Economic Development Corporation and individual supporters of Artists Alliance Inc. Special thanks go to our team of dedicated volunteers, without whom this program would not be possible. For more information, visit artistsallianceinc.org.

This exhibition is realized in partnership with Artist's Alliance Inc. with support from The Cultural Services of the French Embassy, Galerie Nathalie Obadia and Galeria Millan.