The work of Sookoon Ang centers around intangibles and their co-existence with the rational world. In this evening talk, the artist will discuss with Kyle Dancewicz, Exhibition and Program Manager at SculptureCenter, the trajectory of her interdisciplinary practice, highlighting her interest in the history of art and literature and their influences on her work. Ang will present a series of recent works followed by a screening of selected film and video works.

Sookoon Ang lives and works in Singapore and Paris. The artist has consistently and precisely built a body of work produced in response to the transient nature of existence. Through a variety of media, Ang stages nonlinear narratives that engage layers of perception and the plasticity of interpretation. Her association of seemingly contradictory materials and ideas poetically approaches problems of pictorial space and sculptural presence, often by engaging nuanced but transformative production techniques to create objects at the edges of comprehension. Ang's works are open in the sense of Umberto Eco's understanding of an artist's decision to leave arrangements of some components of the work undefined in order to encourage an interactive dialogue between the viewer and the object.

Photos of the discussion: 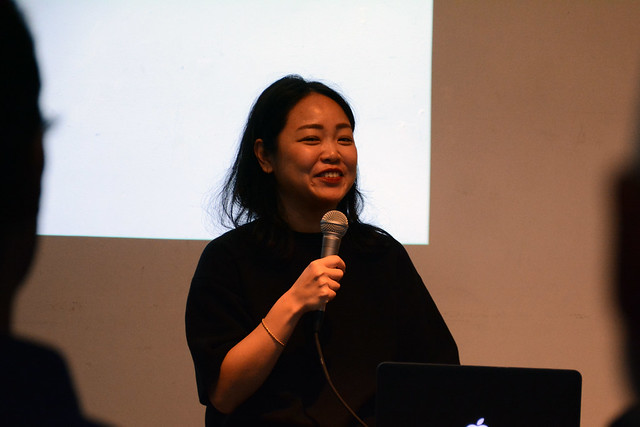 Kyle Dancewicz holds a BA in art history from Harvard University and is currently a graduate student at Hunter College. He is Exhibition and Program Manager at SculptureCenter in Long Island City, where he oversees the organization's artistic, public, and educational programs and manages the development and production of all of SculptureCenter's exhibitions. In previous years, Dancewicz was Curatorial Manager at Madison Square Park Conservancy, where he developed large-scale temporary public art commissions. He has recently been a visiting critic at Residency Unlimited, the Wassaic Project, and the Fashion Institute of Technology.

This program is made possible with support from the National Arts Council, Singapore.