The artists from Cuba, Michel Pérez and Alain Pino, will discuss their respective practices and recent projects with the curators Rafael DíazCasas and Elvis Fuentes. Together they will examine the relationship between painting and objects reflecting upon Pino's exploration of the human condition through hybridity of materials and disciplines as well as Perez's investigations in the field of painting. 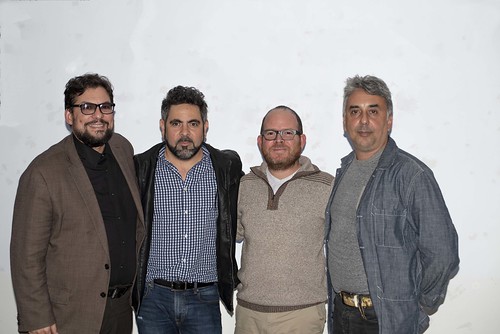 Michel Pérez ’s abstract-figurative works give him a unique position in his generation, and among artists in Cuba as a whole. As a painter, his concern is to avoid faithful accuracy in favor of a universal expression. He focuses on the superordinate, the human-personal, so that his paintings seem like expressions of a new humanism, especially wherever there is the talk of a “tropical depression” – an actual meteorological term for a weather situation in the Caribbean that is dismal, grave, densely cloudy and dark. Represented by Galerie Mai 36, Michel Pérez Pollo's work is exhibited internationally. Recent exhibitions include : 2018: Positivo con positivo. Galería Servando, La Habana, Cuba. 2017: Art x Cuba – Contemporary Perspectives since 1989; Ludwig Forum für Internationale Kunst, Aachen. Germany. (Group) Kuba Art Now, Singer Laren Museum, The Nederland. (Group). Uqbar-Mai 36 Galerie, Zurich. Suiza. (solo). 2016: Siete días de suerte. Siegfried Contemporary, Londres (solo); 2015: Between. Union Nacional de Arquitectos de Cuba. La Habana, Cuba. See the exhibition history here.

Elvis Fuentes is a Ph.D. Candidate in Art History at Rutgers University. His research interests focus on the afterlife of Soviet visual culture in Latin America–in particular Cuba and Nicaragua–and the impact of the Cold War in contemporary artistic practices and aesthetics. For over fifteen years, he has served as a curator at art institutions in Cuba, Puerto Rico and the United States. Awarded Grand Prix at the 26th Ljubljana Biennial (2005), Fuentes has curated exhibitions across Europe, Asia and the Americas. He has recently been appointed Chief Curator for the San Juan Poly/Graphic Triennial.

Rafael DiazCasas is an art historian and independent curator, working as an art advisor based in New York City. With an interest in modern and contemporary art focused on Latin America and Cuba, he has curated exhibitions in the United States and abroad. He writes about art and culture for several national and international publications and is a co-author of Hard Light: The Work of Emilio Sanchez (Prestel London – New York, 2011). Since 2013 he has been a lecturer at The School of Visual Arts in New York City. Currently, he is working on a retrospective exhibition of Dolores (Lolo) Soldevilla (1901 -1971). Upcoming publications include a monograph of Salvador Corratge (1928 - 2014), a member of the Cuban 10 Pintores Concretos group.