Storytelling is both an act of creative genius and the product of the shared history of a particular culture. How do we create and continue our stories today, in a world that can seem to amplify certain stories over others, sanitize some, or produce only the stories that create paying customers? When do the stories that are not our own, like those of pop culture, become ours? These topics will be addressed by Martina Vacheva, who works between Plovdiv, Bulgaria, and Bretagne, France, and the local curator Nora Boyd. Vacheva is a book illustrator by training whose paintings alway focus on the stories we tell as cultures, as communities, and as individuals. 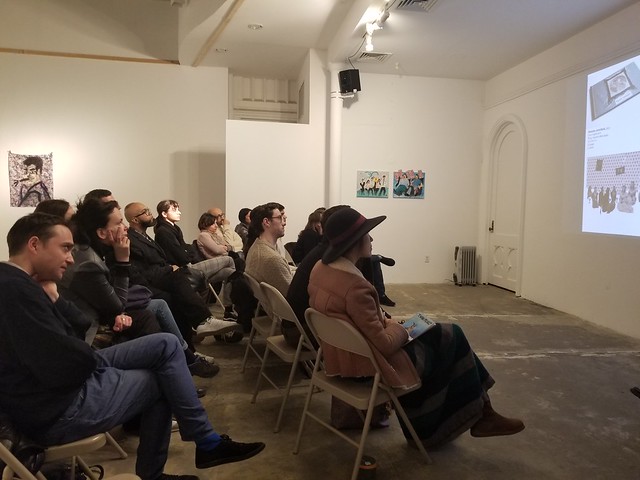 Martina Vacheva is the recipient of the 2017 Young Visual Artist Award/ Baza Awardee in Bulgaria and belongs to the youngest generation of Bulgarian contemporary artists. Her practice is rooted in the fanzine culture and she uses various techniques in her artistic process such as collage, drawing and painting. Vacheva uses universal archetypes such as the hero, the rebel or the jester in her prints and paintings. Her world is populated by characters from popular culture such as Jabba the Hutt (Star Wars) and Kukeri, Bulgarian folkloric symbols that confront each other. The artist juxtaposes compositions from cult film scenes with Bulgarian traditions. American film protagonists and locals overlap by reproducing film cliché on the streets of the artist's hometown. Mitch from Baywatch is called to take on the role of a lifeguard next to the “singing fountains” in Plovdiv and Veselin Marinov and Kichka Budurova recreate scenes from the movie Titanic.

Nora Boyd is an independent educator and curator based in New York City whose work focuses on creating access to art through educating, curating, and programming. She is writing a master's thesis on modernist houses in Mexico and Tunisia while giving tours of museums, teaching undergraduate art history, curating small shows, and eating Shanghai soup dumplings around the city. She has recently curated "After Truth: New Works by T. Eliott Mansa" at the Hunter East Harlem Gallery (2017) and "Copy Translate Repeat: Contemporary Works from the Collección Patricia Phelps de Cisneros" at 205 Hudson Gallery (2018), and is working on an upcoming performance project at El Museo de los Sures (April 2018). She is one of the founders of Bao Collective, which shows and advises non-professional artists, poets, and illustrators.