RU Talk: JUJU U in conversation with Yukie Kamiya Join us for an evening of conversation between the RU artist and Asian Cultural Council Fellow JUJU U and Yukie Kamiya, Director of the Japan Society Gallery. Via the lense of JuJU U's practice, they will examine different strategies for visual representations of culture including the artist's expanded use of craft related techniques that she applies to the study and exploration of a wide range of unconventional materials. The ongoing photographic series Super Museum Project is an example of this. Begun by the Seoul based artist in 2012, the photographs feature everyday items displayed in supermarkets from around the world and highlight how closely they align themselves to relics of fine art normally seen in museum contexts.  The North, a more politicized body of work by JUJU U is another manifestation of her unique artistic methodology incorporating North Korean propaganda printed material. 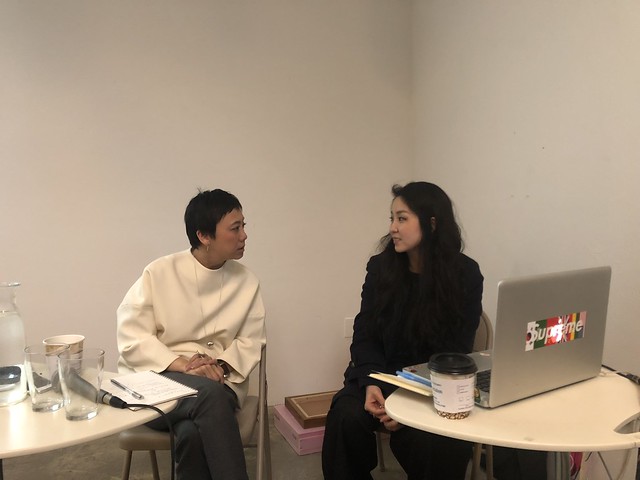 Previously Kamiya was Chief Curator of Hiroshima MoCA from 2007 to 2015. She began her curatorial career in the United States at the New Museum, New York, serving as Adjunct and Associate Curator from 2003 to 2006. She has curated numerous exhibitions internationally, focused on art in Japan as well as widely in Asia including Cai Guo Qiang, Yoko Ono, Jiro Takamatsu and Do Ho Suh. She also served as guest curator for cultural institutions including the Japan Foundation and Goethe Institute and curated group exhibitions Discordant Harmony: Critical Reflection of Imagination of Asia (2015-2016), Re:Quest Japanese Contemporary Art since the 1970s (2013), Under Construction: New Dimension of Asian Art (2002-2003), which toured to East Asian cities; Beijing, Seoul, Taipei and Tokyo. Her writings have appeared in periodicals such as Art Asia Pacific, BT (Bijutsu Techo) and Asahi Newspaper, also in publications including Ravaged: Art and Culture in Times of Conflict (Mercatorfounds, 2014), California-Pacific Triennial (Orange County Museum, 2013), Creamier: Contemporary Art in Culture (Phaidon, 2010) and Taipei Biennial (Taipei Fine Art Museum, 2006). Kamiya has served on selection committees including for Cultural Affairs of the Japanese and Tokyo metropolitan governments, DAAD, Hermes Korea and the Rolex Mentor and Protégé International Program. Kamiya received the Academic Prize from the National Museum of Western Art, Tokyo for her curation of Simon Starling: Project for a Masquerade (Hiroshima) in 2011. Kamiya studied art history at Waseda University, Tokyo and completed the Curatorial Program at De Appel Art Center, Amsterdam.

JUJU U's residency is made possible with support from Asian Cultural Council NYC.