What kind of power can be exercised through images and how is it harnessed? Is there any agency in the often uncertain, random, and overwhelming production of images today? What is the role of visual arts in the age of precarity? These are just some of the questions to be addressed in this discussion with two resident artists, Simon Hudolin/Mateja Rojc as Small But Dangers (Slovenia) and Jelena Miljić (Serbia), both of whom explore the poetics and tensions between visual records; their reception, creation, and function over time. The artists first give short presentations of their work and will then be led in conversation with filmmaker and media scholar, Amir Husak. Below please find the documentation of the talk: 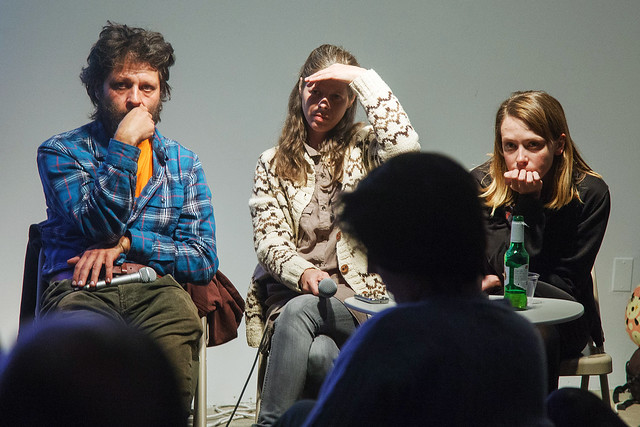 Based in Belgrade, Jelena Mijić is a photographer who works across disciplines in order to explore randomness, indetermination, participation and chaos in art, along with questions about authorship, imperative of originality, ingeniousness and authority of artist's personality, institutionalization of art, and also about the commonly accepted postulates on which art and artworks stand. Jelena Mijić is a member of the Belgrade Raw photo collective, and is part of the artist run residency program MultiMadeira based in the Portuguese island of Madeira. She is a recipient of 2017 Young Visual Artist Award / Dimitrije Bašičević Mangelos Award that provides the winning artist with a 2 month residency at Residency Unlimited.

Since 2004 Simon Hudolin works with Mateja Rojc as the tandem Small But Dangers. Their practice spreads through a wide variety of mostly analogue visual media focusing on emancipatory potential of language that exists in the conflicting relationship between thought and the object. Since 2010 Small But Danger is represented by P74 Centre and Gallery, Ljubljana, Small But Dangers. Awards include 2017 OHO AwardYoung Visual Artist Award that provides the winning artist with a 2 month residency at Residency Unlimited; 2017 P.A.R.A.S.I.T.E. Museum of Contemporary Art, Maribor; Essl Art Award CEE 2015 - VIG Special Invitation, Ljubljana.

Amir Husak is a filmmaker and multimedia artist based in Brooklyn, New York. Combining emergent and traditional media, essay and experimental techniques, Husak's work explores documentary as social practice and investigates digital media representation of history and identity politics. His works have been shown at such diverse places as South by Southwest (US), Sundance Film Festival (US), Sarajevo Film Festival (Bosnia & Herzegovina), Stadtmuseum Graz (Austria), P.O.V./PBS (US), Big Sky Documentary Film Festival (US), TV Cultura (Brazil), and Full Frame Film Festival (US). Husak is both Fulbright and Jack Kent Cooke fellow and he currently teaches in the Media Studies program at The New School in New York City.