common place looks at recently-developed bodies of works confronting, adapting, expanding on history, industry, materiality and the localities and timelines which inform them. This group exhibition, featuring international artists with Residency Unlimited (RU), explores a scope of gestural renewal. A Persian carpet, a running fountain, industrial-grade painting, blue chips, and solid nail polish – the works in this exhibition also serve as signifiers which draw attention to the critical transformations born of everyday-encountered matter and forms.

For Fatma Shanan, the Persian rug – beyond motif and locale –  becomes a heterotopic zone; in this case, the gallery becomes the new location for interaction beyond its original domestic context. Though renowned for her large-scale oil-paintings, her recent projects also harness the feminine body in relation to these domestic objects of craftsmanship, as entwined site for place-making.Janine Mackenroth’s often playful works, are a sharp prod at Georg Baselitz (“Women don’t paint very well. That is a fact.”), the male-dominated art world and state of the world at large. In a new series, the shedding of gallons of nail polish into hundreds of resultant dots or “CHIPS” and accompanying performance “YOU ARE WHAT YOU EAT” re-conceives the blue-chip art experience. Working via what the artist refers to as “Aspirational Aesthetics”, Clare Kenny creates objects referential of the working class, societal status, and architectural folly. Her running “fountain” DIY assemblage, borrows lightheartedly from decorative garden enhancements archetypal of upper-class households in the UK. Through an amalgam of industrial-grade substances, Douglas Argüelles Cruz investigates the possibilities of novelty in humble materiality as image-making. On view is a painting from the artist’s Misterium series, re-rendering a photograph of an unnamed laboratory from a catalogue on laboratory interiors. In his candid image making process, is also an archival approach to collective and indexical memory, as well as the places in which we contend with histories ever in the making. 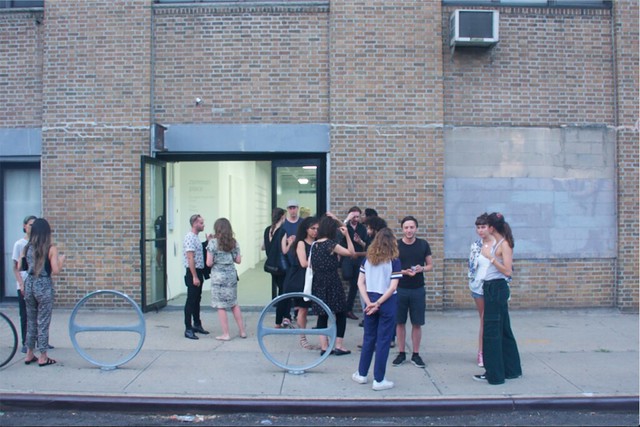 Danni Shen (b. 1992, Hangzhou, China) lives and works in New York, NY is Curatorial Associate at Empty Gallery, a black-cube space dedicated to time-based and non-object-oriented practices, physically located in Hong Kong. She is chiefly based in New York, where she was previously the Curatorial Fellow at Wave Hill and Guest Visitor at Residency Unlimited. She is a contributor at various publications including Hyperallergic, Rhizome, BOMB Magazine and SCREEN界面, and guest curates for OUTPUT, a digital art platform based in Shanghai.

Fatma Shanan (b. 1986 Druze village Julis, Israel) lives and works in Tel Aviv, Israel. Shanan is the winner of the 2016 Haim Shiff Prize for Figurative-Realist Art given by the Tel Aviv Museum where her fourth solo exhibition will open in the summer of 2017. Her works are included in the collections of the Israel Museum in Jerusalem, The Ilana Goor Museum in Jaffa and private collections in Israel and abroad.

We are grateful to Silas Von Morisse gallery for hosting this exhibition.This program is made possible with the support from Artis, Asylum Arts, Mifal Hapais, Atelier Mondial Basel (Christoph Merian Stiftung Basel), Rockefeller Brothers Fund and the Cuban Artists Fund. This program is supported, in part, by public funds from the New York City Department of Cultural Affairs in partnership with the City Council.