The HIV/AIDS crisis continues to be a global phenomenon of unprecedented dimensions and yet, besides the outstanding intellectual and artistic achievements of the last three decades in the fields of cultural analysis, art, and curatorial work to make sense of the crisis' impact, the focus has predominantly been on North American and Central-European artists and cultural practitioners.

But what of the visuals, aurals, actions, ideas, lives, which have often been obscured by the hegemony of the North? How could the study of the aesthetic and performative production around AIDS in the "global South" expand our visual and political cultures? Following philosopher Beatriz Preciado, the South here should not be understood as a simple geographic area but “a counter-topia”* that allows us to deconstruct the capitalist and colonial order of today.

Aimar Arriola's recent collaborative research and curatorial projects address these issues with a focus on selected case studies from Spain and Latin America. In this presentation, Aimar will share some reflections and visuals that constitute an archive in progress.

He is joined by Julian De Mayo who is currently researching the demonstrations, media, lives, and legacy of the Latino Caucus of ACT UP New York. Together, they will share meaningful experiences and materials that aim to acknowledge the practices around AIDS often overlooked in the English-speaking world and enrich our understanding of contemporary visuality at large.

(*) Statement of the seminar "Campceptualisms of the South" (MACBA, Barcelona, Nov 2012), directed by Preciado. 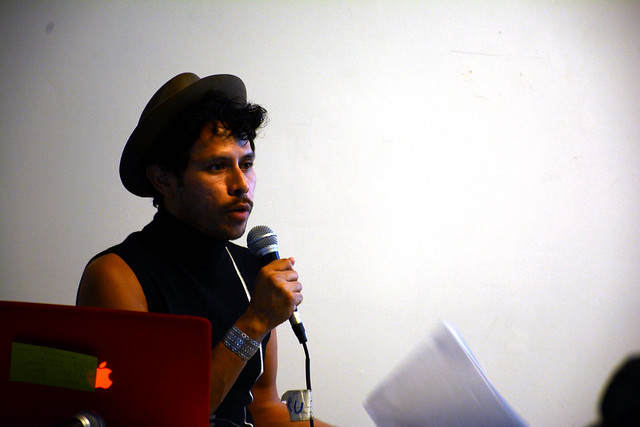 Aimar Arriola’s residency is made possible and co-sponsored within the framework of the collaboration between RU and Visual Aids.

Julian De Mayo is an M.A. Candidate in Media Studies at The New School and is a Member of the research-group Democratizing the Archive, also at The New School. He recently organized Presente! at the NYPL, a two-panel program dedicated to telling the ongoing story of Latino AIDS activism in New York City.

Visual AIDS utilizes art to fight AIDS by provoking dialogue, supporting HIV+ artists, and preserving a legacy, because AIDS is not over.