Videographe, in association with Vithèque and Residency Unlimited (Brooklyn), launches Network consciousness, an online video program complimented by a series of multi-venue screenings. In a time when virtual environments are omnipresent, artist and independent curator Felicity Tayler links together physical and online events.

The event at RU will host the last phase of Network consciousness. This screening combines recent work from the New York-based artist Marisa Jahn (REV-) and RU artist Julia Oldham (Eugene, OR), in attendance at the event, with artists from Québec: Skawennati, Darsha Hewitt, Charles Binamé and Simon Brown. Each video works through the metaphor of the network to reveal contradictions within our contemporary experience of collective awareness.

In a curatorial essay, Felicity Tayler provides a reflection on memory and collective imaginaries, highlighting the influence of “networks” on our daily thoughts and behaviors. The concept of network has long been used to describe the tangled lines of transportation and communications infrastructures, and is pervasive today due to social media, mobile phones and recent global security and intelligence surveillance scandals: http://is.gd/networkconsciousness

Break Up is a collaboration between RU artist Julia Oldham and experimental physicist John Royer (National Institute of Standards and Technology, Gaithersburg, MD). The scientific research into the interactions of granular materials done by Dr. Royer at the University of Chicago parallels the arc of a romantic relationship, Oldham and Royer perform as labmates and ex-lovers.

Network consciousness was first introduced on Videographe’s on-line platform vitheque.com on October 24th 2013, followed by a one-night event at SBC Gallery (Montreal), presenting Light On (Flashlight) by Toronto artist, Luis Jacob. Like the screenings in Toronto and Brooklyn, it was a unique event, limited in time and space, but nonetheless is continuously shared, or networked, over time to a wider audience through similar experiences in other locations and on different platforms. The second phase, which runs concurrently to the event in Brooklyn, is a screening of La Consommation (1973) in the storefront window at Art Metropole, in Toronto.

Felicity Tayler is an artist, librarian and independent curator. In each of these roles she is concerned with printed matter and cultural infrastructure as the material substrate of our social imaginary. Recent projects include a traveling exhibition for the National Gallery of Canada Library and Archives and Artexte, and a workshop on historical representation with Julie Ault. She is a founding member of the Centre de Recherche Urbaine de Montréal. (http://www.crum.ca) 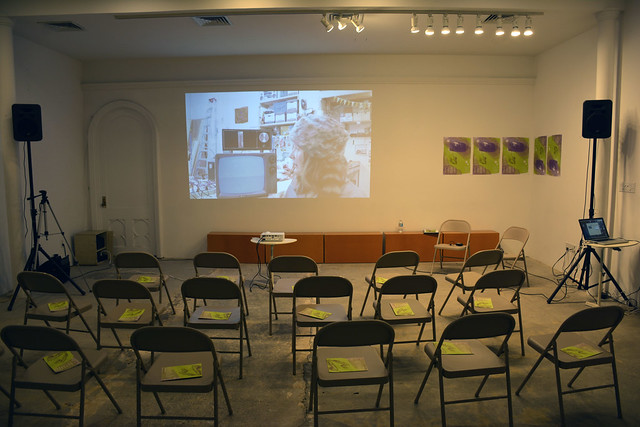