The alt_break art fair  team (Audra Lambert, Kimberly Kitada and Adam Zucker) will speak about its most recent edition, GROUNDED, in Spring 2018. This iteration began with a series of public programs that focused on ways in which grassroots efforts can come together to make a positive impact on environmental stewardship. These programs included an interactive mask-making workshop co-organized with Maskbook; a postcard making campaign to raise awareness about plastic pollution; and a mirror shield project in homage to artist Cannupa Hanska Luger. The exhibition will take place in May 2018 with artists Virginie Marchand and Angela Arrocha. 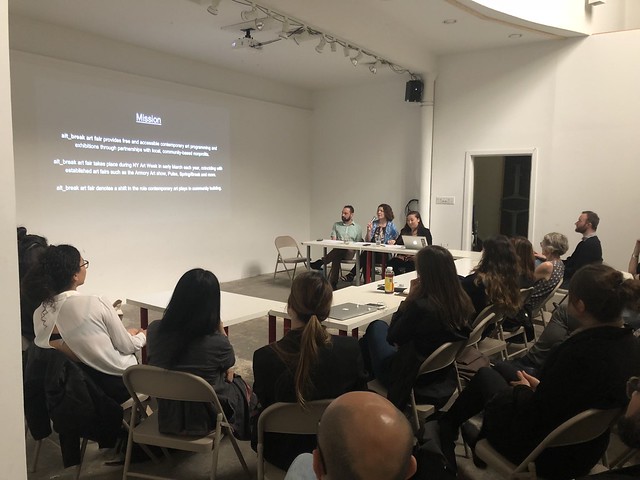 Audra Lambert (b. 1987, New Orleans) is an independent curator and art critic based in New York City and Editor-in-Chief of ANTE. mag, a platform for under-the-radar contemporary arts + culture.  Lambert is Founder/Chief Curator of Antecedent Projects (2014), a NYC- based curatorial consultancy focused on site-specific projects.

Kimi Kitada is an independent curator based in New York. Since 2014, she has worked as Public Programs & Research Coordinator at Independent Curators International (ICI). She co-founded the curatorial collective 7x8, along with collaborating curators based in London, New York, Toronto, Singapore, and Rome. Recent curatorial projects include: (in)complete at TEMP Art Space in New York, NY (2013), 7x8 Curatorial Conversations at Budapest Art Market in Budapest, Hungary (2013), 7x8 Decay at ARTplacc in Tihany, Hungary (2014), Postscript: Correspondent Works at artQ13 in Rome, Italy (2015), and reset at Garis & Hahn, New York (2016). She received a BA in Art History and Classics from Bucknell University, and an MA in Museum Studies from New York University.

Adam Zucker is an art historian, curator, artist, aspiring educator, and lifelong New Yorker. He holds an M.A from the City College of New York in Art History/Museum Studies. From 2011-2014 Adam was the co-founder and artistic director of et al Projects, a Brooklyn based gallery committed to showing emerging contemporary artists and under recognized historical artists. As an independent curator, he has organized multiple gallery and museum exhibitions. He is a co-founder and the Director of Education at ​alt_break​, an alternative art fair that provides free and accessible contemporary art programming and exhibitions through partnerships with local, community-based nonprofits. His writing has been published in Berkshire Fine Arts (online), Sculpture Magazine, Black Cat (art journal), and several exhibition catalogs. Adam is the founder and author of the ​Rhino Horn Group blog​, a contemporary discourse on socially engaged art and figurative painting; and ​Artfully Learning​, where he writers about contemporary art through the lens of education. His curatorial philosophy is to provide a platform for artists whose work examines multidisciplinary approaches to addressing contemporary issues. He is interested in how artistic practice can inform and inspire other disciplines such as politics, education, science, and social justice.