Join us for a private tour of El Museo del Barrio current exhibitions, followed by an artist talk featuring the Davidoff@Residency Unlimited Artist-in-Residence from Haiti, Tessa Mars, in conversation with Harlem-based artist Vladimir Cybil Charlier and Brooklyn-based Shelley Worrell of caribBeing. The discussion will focus on producing work that reflects a Caribbean perspective both inside and outside of the region, with special attention to the Haitian experience. 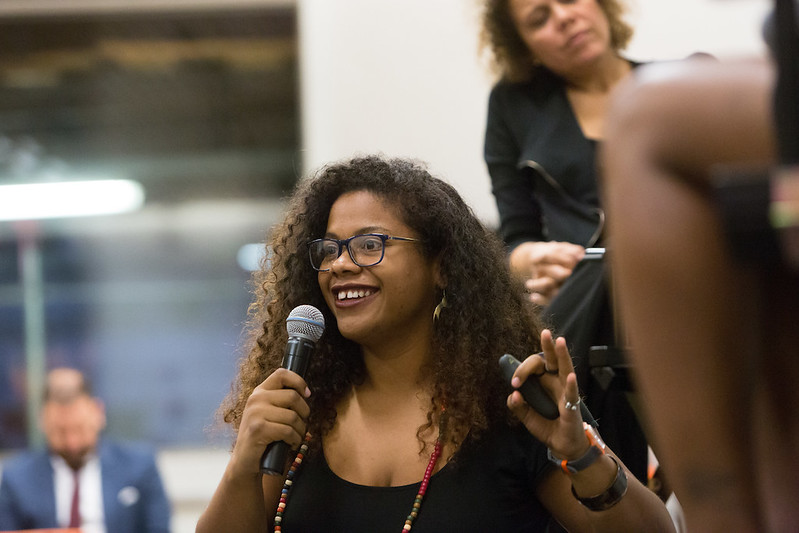 Tessa Mars is a Haitian visual artist living and working in Port-au-Prince. She is the 2017 Davidoff Art Initiative / Residency Unlimited artist in residency. She completed her Bachelor’s Degree in Visual Arts at Université Rennes 2 in France in 2006. From 2006 to 2013, she worked as a cultural projects coordinator at Foundation AfricAméricA. Her work has been exhibited in Haiti, Canada, France, Italy, and the United States. In 2015, she was awarded a three-month travel grant to Alice Yard, Port of Spain (Trinidad and Tobago), whereupon she developed her artistic alter-ego Tessalines, a fusion of Mars’s name and Dessalines, the Haitian revolutionary leader, conveying a vibrant if unsettled mix of spiritual beliefs and national identity. Recent activities include a solo exhibition Tessalines et moi, Institut Français en Haiti (Port-au-Prince) and Caribbean Linked IV, Ateliers ’89 (Oranjestad, Aruba).

Vladimir Cybil Charlier was born in Elmhurst, Queens. She holds a BFA from Queens College and a MFA from the School of Visual Arts. Prior to her 1997 residency at the Studio Museum in Harlem, she attended The Skowhegan School of Painting and Sculpture. In 2003 Cybil won the solo exhibition prize in the Bienal del Caribe in the Dominican Republic, and participated as well in the Cuenca Biennial in Ecuador and the Panama Biennial. In 2006 she created a collaborative piece for the Venice Biennial. Cybil has participated in numerous shows in the U.S. and abroad including recently at the Centro Cultural de Espana in Santo Domingo, The Perez Art Museum in Miami, and the Grand Palais in Paris. Cybil has created many collaborative projects including the “Art Quake” print portfolio after the 2010 earthquake in Haiti, the artist book “Tourist Art” and the body of work “The Politics of Paradise” which both explore the politics of the Caribbean market. Recent publications about her work include Gradhiva from the Musée du Quai Branly, Arc Magazine, Small Axe, The Caribbean Writer and Bomb magazine.

Shelley Worrell was born to immigrants from Trinidad who migrated to the United States in the 1960s and 70s and settled in Flatbush, Brooklyn. The artist spent every summer in the Caribbean from childhood through her high school years. She conceptualized the term “CaribBEING” as an undergraduate at Brooklyn College, where she was a dual major studying Anthropology and Caribbean Studies. It was at that time that she started traveling frequently to the region, which expanded her scholarship, understanding, and appreciation of its rich cultural heritage and diversity.

This program is made possible with the support from Davidoff Art Initiative. We are grateful to El Museo del Barrio for hosting this program.