The exhibition Collective motion presents video works by current RU residents Ginta Vasermane and Maciej Madracki that focus on their shared interest in social choreography as
metaphor for modernity, but also as a mode of shaping social organization. Linking dance
and everyday movement, Collective motion invites us to rethink the aesthetics and social order in relationship to the movement of bodies.

Inspired by images of politicians presented in the media, brawling with each other in the
heat of the debate, in her video installation work Supportive Structures Ginta Vasermane
leaves her fictional men in suits to themselves. Not a moment they seem to care about their formal role and, like their colleagues from the real world, lead mainly to an absurd theatre Here, seemingly improvised set of unpredictable movements in randomized spaces and situations, rigorously repeated in continuous circles, bringing the absurdities and tragicomic aspects of human’s
slapstick to the foreground.

In the video installation The Work of Machines Maciej Madracki {MML Collective}
aims to link the past to the present of a communist ‘model town’ located in Poland. The
reconstruction of a forgotten dance — created in 1968 to celebrate town’s aircraft factory
— served as a leitmotif giving a new perspective on relation between industrial plant and
inhabitants of a typical worker’s town, allowing for a trip to the era where production was
supposed to mean a happy life.

Further exploring the topic of archeology of gestures MML Collective's Shipyard
constitutes an archive of a physical and motorized memory of the Gdańsk Shi­py­ard.
Inspired by the studies of American scholar Frank Gil­breth (1968−1924) the pioneer of
time and motion study, MML used a black interior with a white grid, retaining the
proportions of the Modulor invented by Le Corbusier in 1942. This object permitted to
study the workmen’s motions and their cataloguing by means of video and graphic forms.
This, in turn, facilitated the creation of an inventory of shipyard figures. 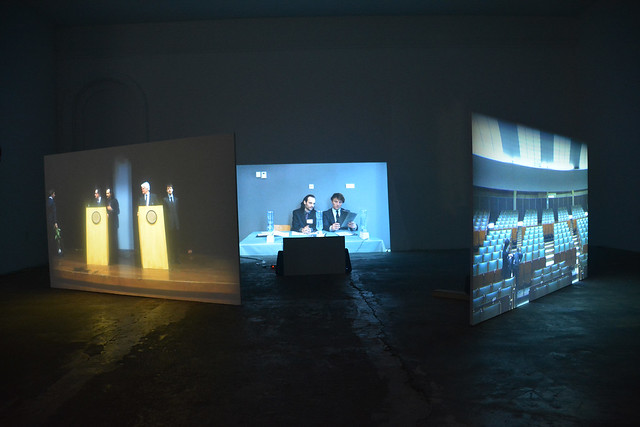 Ginta Vasermane and Maciej Madracki are the founders of the Moving Art Initiative F.L.O.A.T., a nomadic art platform for research, experimentation and presentation. From its inception Vesermane and Madracki considered F.L.O.A.T. as an extension of their artistic practice into the curatorial field. Their impetus was to merge and cross pollinate their experiences in picture making, video installation and cinema to develop  new audiovisual narrative forms of exhibitions.

In her practice Ginta Vasermane creates video installations exploring human activity within
the realm of organizational culture with carefully composed performances displayed in
multilayered video arrangements. Using the means of choreography and irony she
examines the regulations, patterns and procedures that govern modern societies.

Maciej Madracki works in collaboration with Gilles Lepore and Michal Madracki under the
moniker of MML Collective. Their recent works focus on ideologies; fantasies that are
shaping the destiny of community. In practice MML works with specific communities, at
times for several years, in order to develop an immersive cinema narrative which
intertwines fiction and reality. Their films are featured as installations in exhibition venues
and screened in cinemas.

This program is made possible with support from the Adam Mickiewicz Institute in Poland.