“Drop off”, screening by Mami Kosemura in conversation with Diana Lee

RU artist Mami Kosemura (Japan) questions and breaks the veneer of the still image from something that may be flat, or even artificial, into what is active and strongly present.

Kosemura’s current video work incorporates various elements of painting, composition, and perspective through painting-like photographs. By broadening her methodology, viewers’ expectations of static imagery are subverted through the introduction of physical movement and illustrating the passing of time.  “Drop Off” captures the essence of 17th century Dutch still-life paintings while making some rearrangements to avoid some common cliches typically found in still-lives.

Of her works Kosemura says "This leads viewers to question, for example, is it a painting or photo? Still or moving? Fiction or reality? When we lose our fixed perspectives, we connect to these questions better, as well as to deeper questions about ourselves, where we are or what we are, our own self-understanding and our relationship to the external world.”

In conversation with Diana Lee, the artist will also talk about her upcoming exhibition at the Dillon + Lee Gallery scheduled for November featuring a new still-life series of photographs and a site specific video installation that will be shot in the actual location of the gallery. 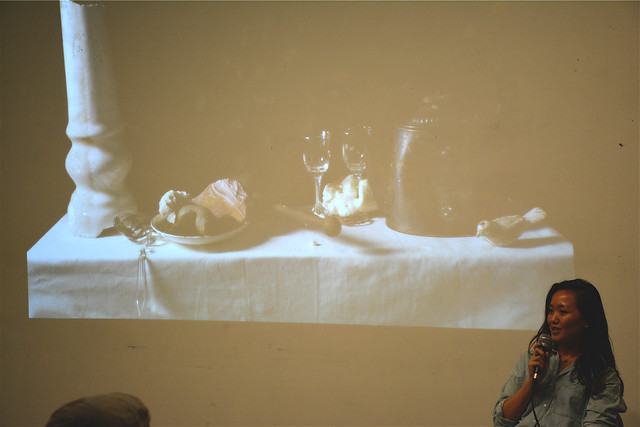 Mami Kosemura is a contemporary artist whose early photographs and animations reference traditional subjects taken from classical European motifs and Japanese painting by exploring the confluence between painting and filmmaking. She is based in Tokyo and is currently staying for a year in New York receiving a grant as the winner of the Gotoh Cultural Award. Her piece, ‘Flowering Plants of the Four Seasons,’ is currently on view at the Asia Society’s anniversary exhibition, “In and Out of Context: Asia Society Celebrates the Collections at 60,” and she will open a solo exhibition at Dillon Gallery in November 2016. Mami received PhD. in Painting and M.A. in Mural in Tokyo University of the Arts.

Diana Seo Hyung Lee is a gallerist, writer, and translator based in New York City. Her writing and translations have appeared in Flash Art, The Brooklyn Rail, ArtSlant, Degree Critical, and ArtAsiaPacific. Having served as the director of the  Dillon Gallery since 2014,  she is now a partner of the new Dillon + Lee with Valerie Dillon. Diana received her MFA in Art Criticism and Writing from The School of Visual Arts in 2012 and BFA in Fine Art with a concentration in Sculpture and Printmaking from Cornell University in 2008.

This program is made possible with the support of The Gotoh Memorial Foundation.