One picture is worth a thousand words. This asymmetrical adage— one picture is worth one thousand words — is premised on the logic that words and pictures are somehow exchangeable entities with discrete values. Both signal the way things are in the world. That is certainly one way of looking at the relationship between pictures and languages that is still commonly employed in the marketing world where this phrase was undoubtedly coined.

There is another less positivistic, more heterogeneous way of considering the relationship between words and pictures that places human subjectivity at its core. This view recognizes reality as a sequence of unstable images that must be constantly interpreted and reiterated into words with flawed, imperfect humans as its translators. Each misinterpretation and failed translation creates a new series of meanings that is endlessly generative in its possibilities as well as its frustrations.

"Body Language" is an exhibition that brings together 5 artists who consider this very process of constant iteration and reinterpretation in their work. Through diverse means, each artist explores human representation through the inconsistency and failure of language and gesture to express need, desire and intimacy. Humans are perceived as players within a matrix of pre-existing languages and forms who struggle to come to terms with emotion and desire.

Noilin O’Kelly explores the uncanny dimensions of portraiture by experimenting with the limitations of facial expression to communicate bodily discomfort, pain, and abasement. Her life-size projections portray solitary individuals trapped in an uncomfortable interstitial space as their bodies are slowly submerged into an emulsified medium. Their strained, almost unreadable expressions are both mysterious and unsettling as indications of an alien, ungraspable reality beyond the projected picture plane.

Bodies entwine and act upon each other with increasingly unregulated cannibalistic desire in Antonia Dias Leite’s video installation There. Dias Leite’s unflinching, claustrophobic look into human sexuality scrutinizes the carnal relationship between passion and violence—sex and death—as it relates to the drive towards the internal psychic dissolution of the self. The installation itself exists on the border between representation and abstraction as the bodies both mirror each other and become unbound and formless over time.

Katya Grokhovsky’s diverse practice is informed by an understanding of the migrant female body. Through performance, video, sculpture, drawing and painting, Grokhovsky charts how the body can act as an imperfect yet emotionally salient instrument of communication. Her work is by turns anxious and ardent as it strives to connect with an incommensurate other who is both a stranger and possible lover. Her sculptures and drawings stretch and contort anthropomorphic shapes into improbable, unruly positions, their forms retaining the memory of previous physical and mental efforts.

Alexandra Verhaest mines the restrictions of expression and communicability through language by working with known works of literature that are then manipulated and re-told visually. In so doing, she employs the tools of storytelling to question narrative structure itself. Her current work draws inspiration from Franz Kafka’s The Metamorphosis, in which the protagonist Gregor Samsa’s unspoken psychic connection with his sister, Grete, is a crucial element of the plot. Verhaest reimagines the dynamics of their relationship through tropes of science fiction and video games.

Maayan Sheleff’s project in collaboration with Eran Hadas and Gal Eshel, Frankie the documentarian robot exceeds the corporeal boundaries of the body to explore what it means to be human. Frankie is a documentary robot that interviews individuals about their emotions in order to catalogue and “learn” about them—the robot does not recognize bodily gestures, and is wholly dependent on language and eye movements to comprehend its interviewees. Frankie’s artificial intelligence investigates the possibilities and limitations of disembodying the human consciousness. While the robot opens a framework for understanding our relationship with and beyond the human, Frankie's frequent failures to understand its interviewees also mirror the fragility of inter-human communication and intimacy. 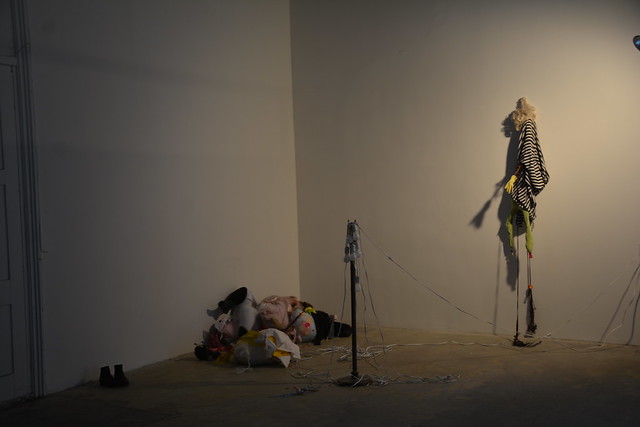 This exhibition is made possible with support from OiFuturo, the Flemish Government, The Arts Council of Ireland, Artport, Tel Aviv, Artis Grant Program, a private collector and an anonymous funder.
This program is supported, in part, by public funds from the New York City Department of Cultural Affairs in partnership with the City Council.

Chelsea Haines is an independent curator and writer based in New York. She has organized exhibitions and programs for institutions such as Independent Curators International, the Shanghai Biennial, and the Vera List Center for Art and Politics at The New School. She is currently a doctoral student in Art History at The Graduate Center, City University of New York.