Afterimage brings together a diverse range of works by four artists, all bound by that which is not explicitly shown. The title refers to an image that appears in one's vision after the original has disappeared ­- a visual ghost that insists on its own presence by burning a temporary mark in the sightline. Each work leaves empirical evidence of an action through histories, relationships, movements, or events, all relating back to the physical presence of the body. On display are manifestations of these traces, leaving one to wonder if, or to what extent, an apparent action had in fact taken place.

Kanako Hayashi’s work explores the language of underwater choreography in order to develop the physical gestures used to create her immersive drawings. Repurposing bodily movement taken from her early years as a synchronized swimmer, Hayashi’s final drawings are the static leftovers from this solitary performance. As a hint to the work’s creation, Hayashi includes a simple video in the installation, which shows her practicing these gestures in the water, studying the range and limitations of the body’s motion in this restricted environment.

Mille Kalsmose presents an installation consisting mainly of five anthropomorphic sculptures, each referring to a member of a family unit - the core kinship bond that gives value to one’s presence. Playing with the practical limitations implicit in having a body, the forms are only stand-ins - not unlike our own temporary houses for our souls. Questioning where the material and ethereal combine to create what it means to be human, these imperfect surrogates attempt replication through their size, form, and color, but remain self-aware of their inability to achieve consciousness or build relationships.

Peter Depelchin’s Voguing Jesus conflates contemporary dance movements with iconic historic representation, taking inspiration from the Pietà, a visual that has appeared in his work since 2014. In this drawing installation, Depelchin focuses on the fluid, feminine posture typical of these renaissance bodies, illuminated by his discovery that when the figures are rotated into a vertical position, they appear to be in the middle of a dance rather than a death scene. The resulting tableaux vivants, created in situ, appear as ghost images traced directly onto the wall, suggesting their temporal instability not only in the space of the gallery, but also in the larger historical narrative.

In Phil America’s The Perilous Fight, the artist displays photographic evidence of an exhibition mounte deep inside the New York City subway tunnels. The works on display in this hidden gallery are a series of flag sculptures, created by the artist, each embroidered with a different type of gun representing a specific national incident. In this dark, unlikely exhibition space, the flags appear frozen in a moment of being tossed by the wind, despite the still air that surrounds them. In contrast to their transient placement, unlikely to be seen, the flags are emblematic, serving as a tribute, memory, reminder, and warning of the violence so prevalent in the American national identity.

Rachel Steinberg is an artist, curator, and organizer based in Brooklyn. She is interested in digital and time based media, collaborative practices, science fiction, and examining the role of alternative art spaces. She holds a BFA from Pratt Institute, and is currently the Gallery Director at SOHO20 Gallery in Bushwick, Brooklyn. Steinberg previously served as the Assistant Director at NURTUREart Non-Profit, where she was the founder and curator of NURTUREart’s semi-annual video exhibition Videorover. She was also an active member and co-organizer of Trade School New York from 2012-2014. Steinberg also works selectively as an independent curator, having curated exhibitions both locally and internationally.

Photos of the opening: 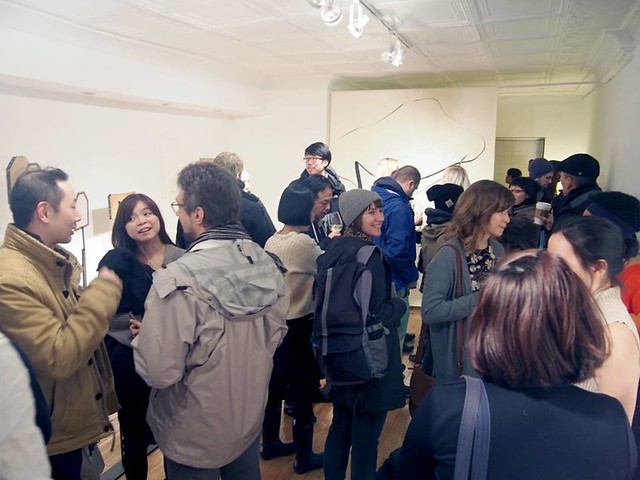 --
This exhibition is made possible with support from the Pola Art Foundation, Faurschou Foundation, and private donors.