Absence of Evil is the Evil of Absence From Pentateuch to Arpanet, databases form our ethical foundation. They total to a framework by which we determine how to be nice, and how to ward off all that wishes to harm us. So a residency is a kind of safe haven, streamlined until secular/contemporary. Tomes we build churches around seem invincible, despite millions who are over it. You can’t just throw the bath water out and leave this really important baby right there, like in a shed outside for animals.

That said, even all-powerful texts are fragile in their way. Viewed from the right angle, they’ll have a lazy eye, a crooked facial feature, bad grooming, a chapter where two editors fought out their long-term grudge only to bewilder every reader. And one can hope that somewhere on this planet, reader, fan, and underwriter of the new museum wing all mean the same thing. One word says them all. You can call the entire faithful by name in just a breath. Hello, Goodbye, and Peace.

It’s in this “just took shelter + who wants to meet up” safe space that personal growth is a basic guarantee. Graceful acceptance of flaws and a ceasing of self-shame for having them is yours free online, in big groups of friends, and honestly in quite a bit of scripture. I’m going to back off from that last point though before it goes over the edge.

If you think of what a church is like, versus wherever you live now, and extend that to art practice, there’s a distinction between soothing and tolerated waking lives. A church has ceilings and windows. The windows are stained, with lots of red. So you’re literally seeing the world through rose-colored glasses. Also high ceilings – so far up they come to a point – supercharge your limitless certainty you’re worth everything.

Do it. Go for it. And since we’re going there, let’s say that artists can, if they feel like it, live as texts. A group show would be several translations happening all at once. A database of truths emerging through acerbic contradiction would bubble up. It would be the kind of thing a community flooring it down the left hand path, somewhere in the middle of a dérive-on blast road trip invents by accident. A close-knit crop of interfacing aims quite often does produce objects and events we feel such zealotry to protect. We cloak the events in oratory and marinate the objects in myth.

It’s just like parties broke New York creators threw twenty years ago wherever they wouldn’t be kicked out, only to be codified as Lifestyle we now will our puritanical best to simulate. There’s a recipe for disaster in there. Good thing we kept the evil out. 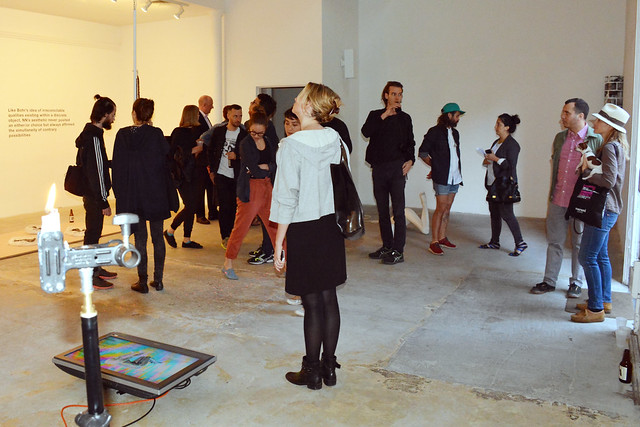 Within the framework of Mikkel Carl's and Pedro Wirz' residencies, this exhibition is made possible with the support of the Danish Arts Council and the International Exchange and Studio Program Basel.