Since 2010, RU is able to foster -through its extensive international network- residency opportunities for New York based artists in different parts of the world. Tonight's conversation will center around the experiences of 5 RU 2013 Outbound artists and their views on developing new work within these particular contexts.

Juan Betancurth and Richard Haines were commissioned to produce new work in in Louisville, Kentucky through RU's partnership with IDEAS 40204. Todd Shalom created sculptures from local materials and led public, participatory walks during his 50 days stay at the Akiyoshidai International Art Village in Yamaguchi (Japan). In South Korea, David Kagan spent three months at the Seoul Art Space in Geumcheon where he produced a musical piece while Jaye Moon participated in the CJ Art Studio Program in Cheongju, and developed a public art project. 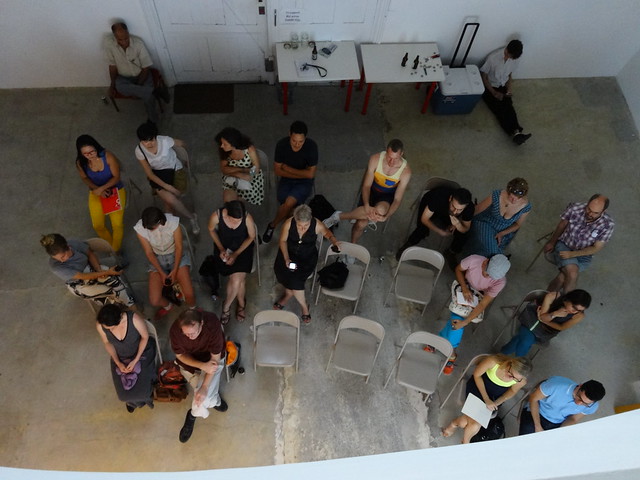 Richard Haines is a New York based artist and fashion illustrator. His wildly popular blog, "What I Saw Today," documents the clothes and attitudes of New York's every day trendsetters and fashion icons of all ages. His first solo show in New York was at Envoy Enterprises. His illustrations have caught the attention of respected critics at Paper Magazine, New York Magazine, men.style.com, refinery29.com and getkempt.com, to name just a few. Haines was selected by Miuccia Prada as a special guest for PRADA’s presentation of the “Il Palazzo” men’s collection, and to capture it in a PRADA Limited Edition 150-page book.

Jaye Moon is a New York based Korean artist. She came to the U.S. in 1990 and finished her MFA in Sculpture at Pratt Institute, New York in 1994. Her solo exhibitions include Newman Popiashvili Gallery in NY, Gallery Momo in Tokyo, Max Estrella Gallery in Madrid and others. Her work also has been shown in group exhibitions at White Columns, Artist Space, Dumbo Arts Center in NY and others.

Todd Shalom works with text, sound and image to re-contextualize the body in space using vocabulary of the everyday. He is also the founder and director of Elastic City (www.elastic-city.org/). His work has been presented by organizations such as Abrons Art Center, Creative Time, ISSUE Project Room, The Kitchen, The New Museum and Printed Matter.