RU is pleased to invite you to meet our current artist-in-residence María de los Àngeles Rodríguez Jiménez on Thursday, November 19 from 12 pm - 6 pm, and to experience her new work in person. The viewing will be followed by a discussion between the artist and curator Amy Rosenblum-Martín from 6 pm - 7 pm.

The talk will be live-streamed on RU's facebook page. Please use the link here to join the discussion.

The work that I’ve been creating at RU is a reflection of my research of the womb, a fluid space of infinite potential. Many of these new works represent the womb with the usage of the color blue. The wet process of indigo dyeing has been integral to this representation of the fluidity of water and the womb. The ocean is a fluid womb that gives life to all, it also has the potential of taking life. Just as Yemaya, the Orisha mother of the ocean has the potential to give and take life. A womb is a water-filled space that is constantly spilling. I am manifesting Yemaya and reclaiming blue for life, for femininity, and for potential. - María de los Àngeles Rodríguez Jiménez

Please visit the album below for install shots and new works. 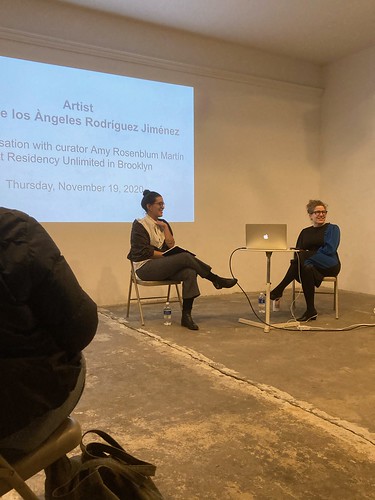 Residency Unlimited (RU) is following social distancing protocol and CDC guidelines to protect staff and visitors. The exhibition will be limited to eight visitors at a time - walk-in, no appointments. Visitors must wear a mask and maintain six-feet between them. Hand sanitizer will be available upon entry. The discussion at 6 pm will also be limited to an audience of eight. If you wish to attend the talk, please email nathalie@residencyunlimited.org.

María de los Àngeles Rodríguez Jiménez was born in Holguín, Cuba, and later migrated to the United States. Her current work focuses on creating offerings, such as objects, happenings, and performances, that emphasize different modes of translation on how diasporic bodies navigate through space in order to preserve a culture and an identity. Jiménez's work is focused on questions pertaining to the body as a temporal vessel, the spirituality of objects, and material symbolism. Her intention is not to anthropomorphize the organic and industrial materials that she works with, but rather to imbue the material with meaning, animating it in order to render something that resembles both flesh and feeling. Jiménez's research on the Yorùbá belief system, and all its translations across the diaspora, has been a pivotal force in defining her understanding of the art object as something that possesses a spiritual power that can act as a form of resistance.

Jiménez held her first solo exhibition, Ojalá, at David Castillo Gallery in Miami, FL. in April 2019. She received a BFA from The Cooper Union, NY, in 2015 and her MFA from Yale University in 2020. Jiménez attended the Skowhegan School of Painting and Sculpture in Maine in 2016 and the SOMA Summer Program in Mexico City in 2019. Her upcoming projects include a Fulbright Fellowship to Salvador da Bahia in Brazil and a solo exhibition at The Knockdown Center in 2021. She is represented by David Castillo Gallery, in Miami.

Amy Rosenblum-Martín is a New York-based independent curator of contemporary art for museums. She is an anti-racist, bilingual (English/Spanish) curator who has long been a leader in the field of Latinx Art and committed to equity and community engagement. The June 2003 ARTnews cover article on Latin American art featured her work and quote: "Latin America is a neglected strand in the development of [global] modernism." Formerly a staff curator at the Pérez Art Museum Miami (when it was MAM) and The Bronx Museum, she has also worked for MoMA, MoMA PS1, the Guggenheim, The Met, MCA Chicago, The Hirshhorn, MACBA (Barcelona), Reina Sofía (Madrid), National Portrait Gallery (London) and Kunsthaus Bregenz (Austria) as well as MIT, NYU, The New School, Peking University and Colección Patricia Phelps de Cisneros.